Gallio was the proconsul of Achaia while Paul was in Corinth (Acts 18:12).

Acts 18:12     While Gallio was proconsul of Achaia, the Jews made a united attack on Paul and brought him into court.  13 “This man,” they charged, “is persuading the people to worship God in ways contrary to the law.”

Acts 18:14     Just as Paul was about to speak, Gallio said to the Jews, “If you Jews were making a complaint about some misdemeanor or serious crime, it would be reasonable for me to listen to you.  15 But since it involves questions about words and names and your own law—settle the matter yourselves. I will not be a judge of such things.”  16 So he had them ejected from the court.  17 Then they all turned on Sosthenes the synagogue ruler and beat him in front of the court. But Gallio showed no concern whatever. (NIV) 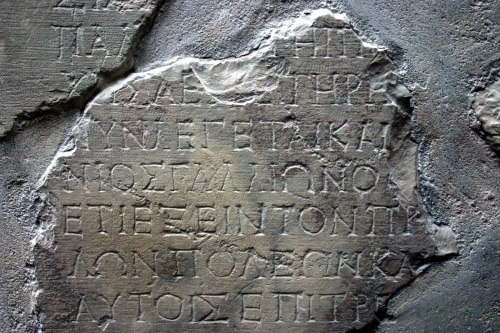 View of the “Gallio Inscription” found at Delphi. In the fourth line from the top, the Greek form of “Gallio” is clearly visible. Click on Image to Enlarge and/or Download.

The inscription is written in Greek and is a copy, carved in stone, of a decree of the Roman Emperor Claudius (A.D. 41–54) who commanded L. Iunius Gallio, the governor, to assist in settling additional elite persons in Delphi—in an effort to revitalize it.

The inscription dates between April and July A.D., 52, and from it, it can be deduced that Gallio was the proconsul of Achaia in the previous year.  Thus Paul’s eighteenth month stay in Corinth (Acts 18:1–18) included the year 51.  This inscription is critical in helping to establish the Chronology of Paul as presented in the book of Acts.

To view all nine pieces of the inscription Click Here.

To view the “bema” in Corinth, before which Paul appeared in the presence of Gallio, Click Here.