Over the years I have seen various diagrams illustrating how the ancient Greeks and Romans—not to mention Herod the Great—lifted heavy stones into place as they constructed the walls of temples and erected columns.  But the first time that I heard about a Lewis Bolt was watching a fascinating DVD put out by The Great Courses entitled Understanding Greek and Roman Technology: From the Catapult to the Pantheon.

In traveling to Greece and Turkey the use of iron and lead to secure columns and other architectural elements was very evident.

The Three Part “Lewis Bolt” — Note that the shape of the cavity that is carved into the stone that is to be lifted is wider at the bottom than at the top — The three parts of the bolt are inserted into the cavity and as lifting takes place the bolt becomes more firmly embedded!

In the diagram above a rope or chain was attached to the loop to lift the stone.

I found that the use of Lewis Bolts was actually very common.  So on a recent trip to Turkey and Greece I began to look more carefully at the carvings into column and architectural pieces that might exhibit where Lewis Bolts may have been used. 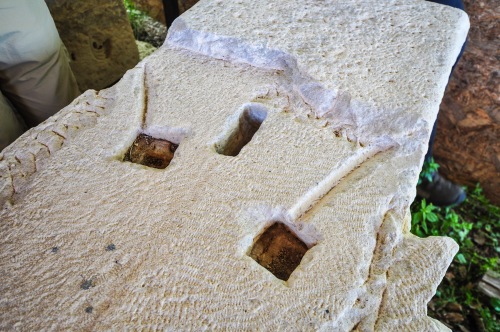 The two square indentations were for iron pegs that secured this piece to its mate — note the grooves that lead to the square holes, for lead to cover the iron to avoid rust — The RECTANGULAR opening is for the Lewis Bolt that was used to lift this large piece (see diagram above)

At Alexandria Troas we were able to examine close up a number of archectural pieces, some of which exhibited the use of a Lewis Bolt to lift them (see above).  The Lewis Bolt indentations are difficult to photograph, but trust me, if you know what to look for you will find them—just stick your finger into the holes and find out how they are shaped!

The diagram above is from “Lewis (lifting appliance)” — Wikipedia

This entry was posted in Archaeology, Artifacts, Places in Turkey and tagged Alexandria Troas, Lewis Bolt. Bookmark the permalink.