Anastylosis — Or, why is part of this photo colored blue?

Coffers, Roof & Capitals of the Nymphaeum in the
Upper Agora at Sagalassos
ALL BUT the blue pieces (I have shaded them blue) are original pieces that were found at the foot of the Nymphaeum and were used in the reconstruction (anastylosis)

The Turkish site of Sagalassos is situated on a remote mountain slope and because of this, building stones from the site have not been carted off by locals nor were very much reused in antiquity.

Thus, when Professor Marc Waelkens and his team were excavating the Nymphaeum in the Upper Agora at Sagalassos they found over 3,500 pieces of the structure and by carefully matching them together they were able to form 400 blocks and columns. 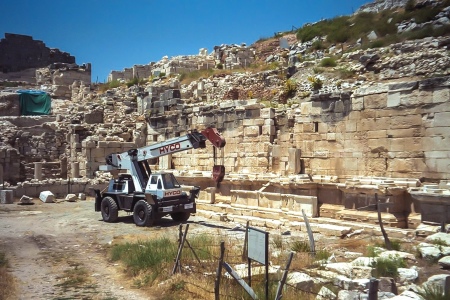 The Upper Agora Nymphaeum after excavation as the process of reconstruction begins. Over 3,500 pieces of the superstructure were found at its base and were carefully reassembled into 400 blocks and columns.

By using these reconstructed blocks and columns, and supplementing these originals with carefully crafted modern pieces, Waelkens and his team have been able to recreate the stunning Nymphaeum, the Heroon, and other structures at Sagalassos. 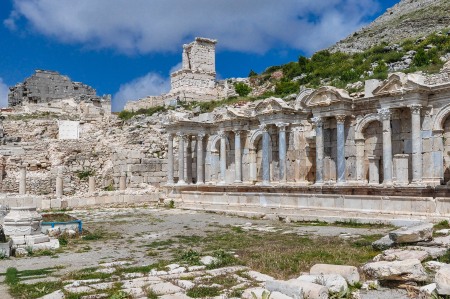 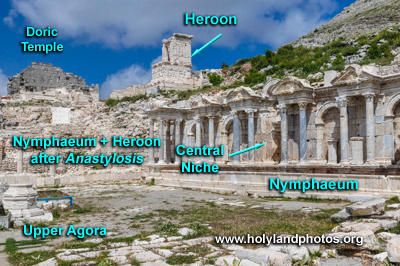 To view the reconstructed Nymphaeum, with water in it(!!), Click Here.

The famous “Library” at Ephesus was similarly reconstructed. 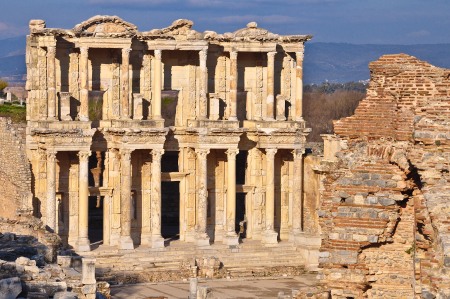 This entry was posted in Archaeology, Artifacts, Daily Life, Places in Turkey and tagged Anastylosis, Nymphaeum, Sagalassos. Bookmark the permalink.