King David at the City Gate

It is well–known that in Old Testament times that the “elders” of a city often would congregate at the gate of their city for a variety of functions.  But it must not be forgotten that kings often made themselves available to their subjects and performed some of their duties there (see below).

One of the many interesting discoveries made by Avraham Biran was a podium and column base that was located at the gate of the northern city of Dan. 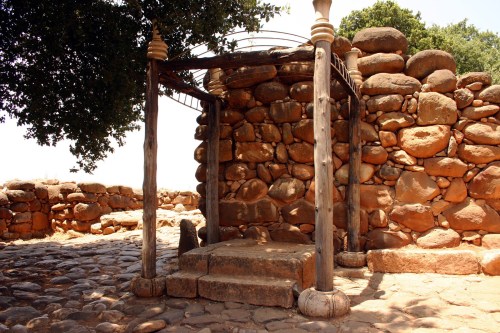 View looking west at the (reconstructed) podium that Avraham Biran discovered at the city gate of Dan. Click on image to Enlarge and/or Download.

It is very possible that the king, or some other official, sat on this podium hearing legal cases (2 Sam 19:8). The decorated stone bases at the corners of the podium supported columns as the reconstruction illustrates. 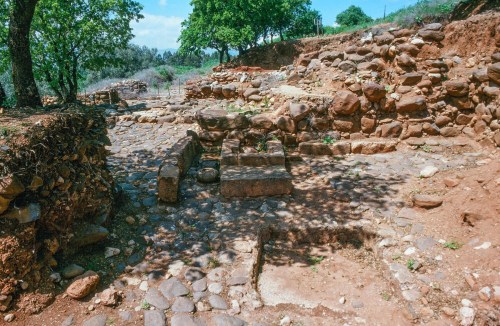 View looking west at the podium (prior to reconstruction [compare photo above!]) that Avraham Biran discovered at the city gate of Dan. 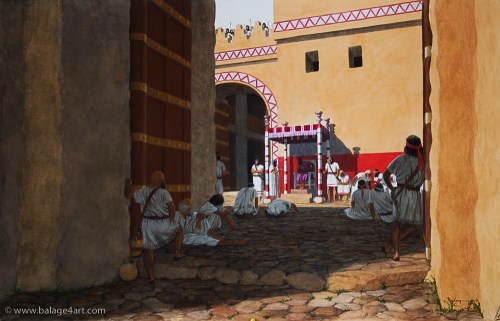 This image has been posted courtesy of Balage Balogh. It may NOT be used on any other web sites, DVDs, or for any commercial purposes without the expressed written consent of Balage Balogh. His images can be viewed at http://www.archaeologyillustrated.com.

A realistic drawing of the Iron Age Gate area at Dan.   The view is from outside of the gate on to a plaza that is located between the outer and the inner portions of the gate.  On the far side of the plaza note the podium where the king could sit (red and white).  To the left of the podium is the archway of the inner gate.

The story of David fleeing from his rebellious son Absalom provides some insight into the king and the city gate.   As David’s troops were leaving the Transjordan city of Mahanaim:

2 Sam. 18:4     The  king [David] stood beside the gate while all the men marched out in units of hundreds and of thousands.

It was in the city gate that David awaited word from the battlefield:

2 Sam. 18:24     While David was sitting between the inner and outer gates, the watchman went up to the roof of the gateway by the wall. As he looked out, he saw a man running alone.  25 The watchman called out to the king and reported it. 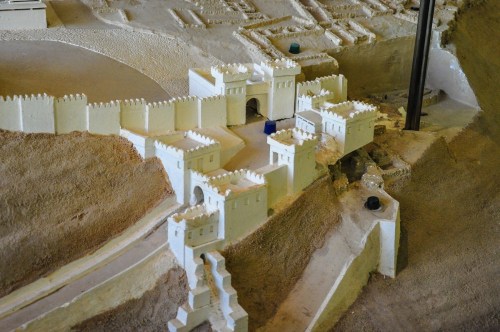 From a previous post, the 6–chamber gate at Megiddo.  Notice the towers and rooms above the inner city gate.

Later during the Israelite and Judean monarchies Ahab and Jehoshaphat sat at the gate of Samaria (Ahab’s capital) where they were deciding whether or not to go up to battle the Arameans at Ramoth Gilead.

1 Kings 22:10     Dressed in their royal robes, the king of Israel [Ahab] and Jehoshaphat king of Judah were sitting on their thrones at the threshing floor by the entrance of the gate of Samaria, with all the prophets prophesying before them.

It was also while sitting at the Benjamin Gate in Jerusalem that Zedekiah, the last Judean king, received word that Jeremiah had been imprisoned in a cistern!

Jer. 38:7     But Ebed-melech, a Cushite, an official in the royal palace, heard that they had put Jeremiah into the cistern. While the king was sitting in the Benjamin Gate,  8 Ebed-melech went out of the palace and said to him,  9 “My lord the king, these men have acted wickedly in all they have done to Jeremiah the prophet. They have thrown him into a cistern, where he will starve to death when there is no longer any bread in the city.”