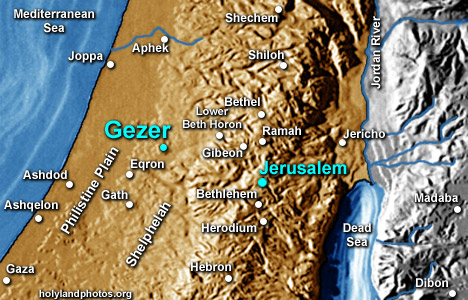 One of the most interesting archaeological sites in Israel is Tel Gezer.  Gezer is situated along the eastern branch of the International Highway (aka The Via Maris) and guards the entrance to the Central Hill Country (territory of Benjamin and Jerusalem and to the north Ephraim).  It is mentioned 14 times in the Old Testament and was of such importance that it was fortified by King Solomon.

Here is the account of the forced labor King Solomon conscripted to build the LORD’S temple, his own palace, the supporting terraces, the wall of Jerusalem, and Hazor, Megiddo and Gezer.  (NIV; 1 Kings 9:15). 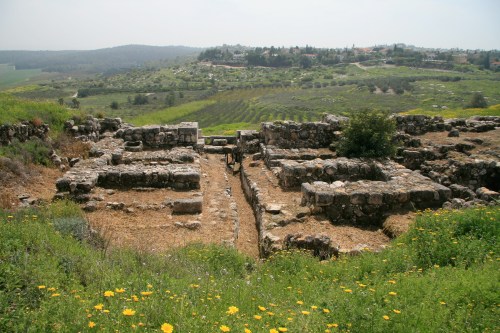 The six-chamber gate that is located on the south side of Tel Gezer.

View looking south at the area of the “Solomonic Gate” on the south side of the mound of Gezer.  The area at the bottom of the image is inside the ancient city, while the top half of the image is outside the city.

According to the initial thoughts of the excavator, Dr. William Dever, the gate dates to the period of King Solomon (970–931 B.C.).  From 1 Kings 9:15 note how Solomon fortified Hazor, Megiddo, and Gezer.

William Dever (right) hosting Yohanan Aharoni (center) at Gezer in the spring of 1967 when we were digging at Gezer. This was the beginning of the re-investigation of the “Solomonic Gate.”

Steve Ortiz and Sam Wolff completed their excavations of structures to the west of the gate in 2018.  One of their goals is to attempt to clarify the dating of the six-chamber gate.