As Christianity spread into the Roman World, one of the major, growing, cults that it faced was the worship of the ascended, deified, Roman Emperors—and eventually the worship of living Emperors.  It is well–known that this practice forms part of the background for the book of Revelation and also for many additional passages found in the New Testament.

So, where did all this take place?  To my knowledge, there is only one almost completely preserved structure known where this occurred.  It is called the Sacellum (chapel/temple) of the Augustales (priests in charge of Emperor Worship) that was excavated at Herculaneum—near Pompeii.  In this and the following post, I will share some images of this very unique structure.

View looking west at the major room of the interior of the Sacellum of the Augustales. Click on Image to Enlarge and/or Download.

This building is a large space with a central nave and two side aisles.  The four columns outline the central nave and above it was a clerestory that let in outside sunlight.  Directly ahead, on the west side is the central shrine where a statue, or bust, of the emperor was venerated.  In the foreground, there are two square pedestals attached to the columns.  On them stood statues of prominent priests that served the imperial cult (=Augustales). 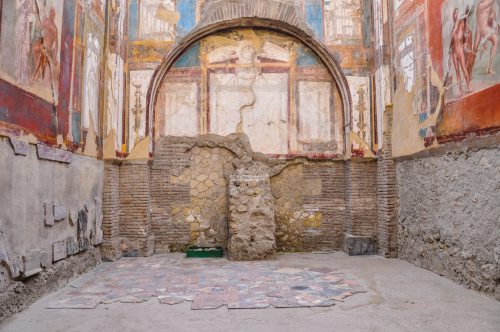 View looking west into the cult room of the Sacellum of the Augustales where the deified Emperor was worshiped. Click on image to Enlarge and/or Download.

As you look directly ahead you see a vertical rectangular podium on which a statue, or bust, of the emperor was venerated.  The white, faded, paint above the podium was the latest style—based upon Neronian examples found in Rome.  The light blue paint in and above the arch was made of a substance that included lapis lazuli that was imported from Afghanistan!

On both side walls are two different frescos of Hercules—see images in the next post.  Below the frescos is barren plaster that previously was covered with marble sheeting—removed during the early tunneling/mining expeditions.  On the floor is a well–preserved marble floor—see image below.

This Latin Inscription was found on the floor of the Sacellum of the Augustales. It mentions that Aulus Lucius Proculus and his son gave a dinner to the (priests), the Augustales, and to the city council at the dedication of this building.

Sacred to Augustus
Aulus Lucius     MEN = voting tribe
Proculus and his son Julianus
P . . . S [= Pecunia Sua = “with their own money”] [CR: compare the use of “P   S” in the Erastus Inscription from Corinth]
[Lower two lines: ] they gave a dinner to the Augustales and to the city council at the dedication of this building [= large public dinner]

Tuck notes that the name Aulus Lucius Proculus indicates that this person was a freed slave who became very wealthy and had become a priest in the organization of the Augustales (= those priests that supervised the Emperor cult).  Talk about upward mobility! 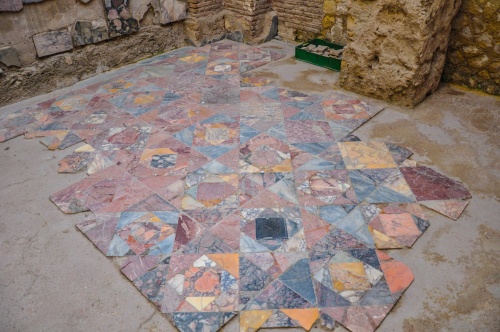 This marble floor is found in the cult room of the Sacellum of the Augustales.

Herculaneum is a city that was located on the Italian coast west of Mount Vesuvius.  It was destroyed in August A.D. 79 when Vesuvius erupted.

Because it was buried by 50–60 feet of pyroclastic material, the buildings and their contents are actually better preserved than those found at nearby Pompeii.  It was probably 1/4 the size of Pompeii.  It is estimated that only 25% of the town has been excavated.

Some scholars have suggested that it was a small fishing village, but because of the finely built houses, and their lavish decoration, it seems more probable that it was a sea–side playground for the elite!

Professor Tuck (see below) suggests that this particular structure was renovated shortly after the death of Vespasian in A.D. 79, early in the reign of Titus—which implies that the room was soon buried by the pyroclastic flow from Vesuvius—ca. 24 August 79—and that is why the decorative elements are so well–preserved.

I am indebted to the explanatory comments of Steven L. Tuck in his engaging “Worshipping the Emperors at Herculaneum,” Lecture 21 in Pompeii: Daily Life in an Ancient Roman City.  Produced by the Great Courses/The Teaching Company, Course No. 3742, 2010.

5 responses to “Emperor Worship at Herculaneum”