Away in a Manger (feeding trough!)

The gospel of Luke contains specific details regarding Jesus’ birth in Bethlehem of Judea.  One of the things mentioned in this narrative is that he was placed in a “manger” (Luke 2:7, 12, and 16). 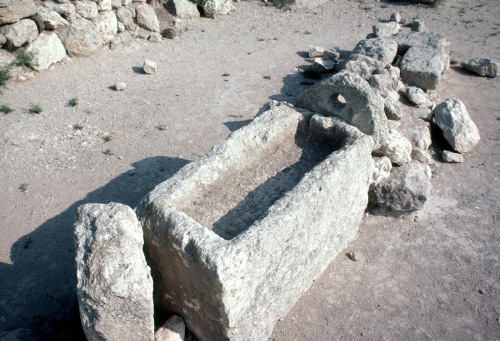 Feeding trough from Megiddo that is located on the edge of the Jezreel Valley.

So Joseph also went up from the town of Nazareth in Galilee to Judea, to Bethlehem the town of David, … and she gave birth to her firstborn, a son. She wrapped him in cloths and placed him in a manger, because there was no room for them in the inn.  And there were shepherds … find a baby wrapped in cloths and lying in a manger … found Mary and Joseph, and the baby, who was lying in the manger.

The Greek word φαντη that is used here typically refers to a stone type trough that was used for feeding of animals—sometimes in the stalls within a dwelling.

This word is used once more in the Gospels (Luke 13:15) where it refers to a “stall” (NIV), actually a feeding trough, for a donkey—and it is clear from the context that this was within a house (Luke 13:10–17). 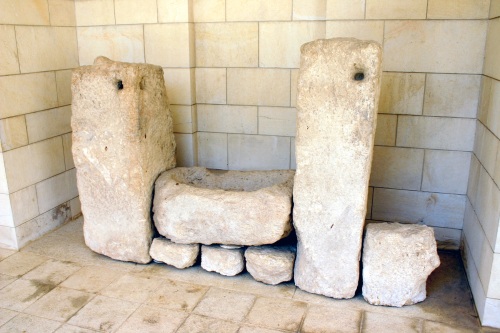 Reconstructed feeding trough from Megiddo—in the Rockefeller Museum in Jerusalem.

The Lord answered him, “You hypocrites! Doesn’t each of you on the Sabbath untie his ox or donkey from the stall (φαντη; “manger“) and lead it out to give it water?

It appears that after the birth of Jesus, that he was actually placed in a feeding trough somewhat similar to the ones presented here if not ones that were carved into the stone floor of the “stable”—a far cry from the rickety wooden “mangers” of Christmas pageants.

As Christmas approaches, I thought I would repost a few “blogs” that are related to the celebration.

This entry was posted in Daily Life, Figures of Speech. Bookmark the permalink.

4 responses to “Away in a Manger (feeding trough!)”