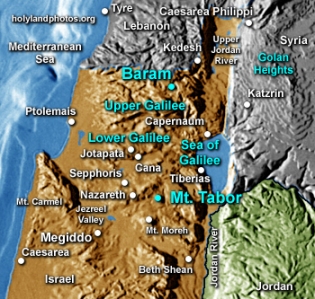 Almost all travelers to Israel will visit the justly famous synagogue at Capernaum on the north shore of the Sea of Galilee—and some will even visit the one at nearby Chorazin.  However, the best preserved of the “Galilean Type” synagogues is the one located at the not-too-frequently visited site of Baram.  It is located in Upper Galilee, about 1.2 mi. [2 km.] south of the Israeli Lebanese border. 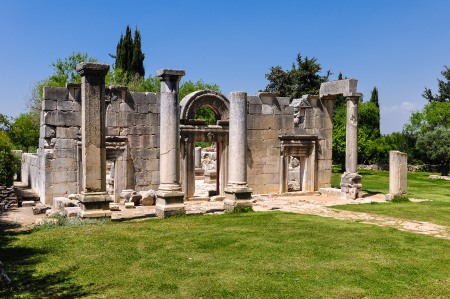 Note the light color of the building.  The darker grey upper portion was exposed to the elements over the years while the lighter lower portion was buried—until excavated.

There were eight columns that supported the roof of the porch—the one on the right (east) side is still standing!  The three main doors faced south—towards Jerusalem.  Stylistically, this synagogue is very similar to the more well–known ones at Capernaum and Chorazin.

Like the synagogues at Capernaum and Chorazin, the one at Baram has a central nave, two side aisles, and a back aisle.  The three main doors faced south—towards Jerusalem.   The floor of this synagogue was paved with limestone slabs (not mosaics).  There are indications that there were benches along the two side walls.

The dating of these “Galilean” synagogues is much debated with dates ranging from the third century A.D. (unlikely) to the six century (more probable).

To view additional images of the Baram Synagogue Click Here.

On Monday I will comment on the “modern” history of Baram—Kfar Bir’im.