One of my favorite places to visit in Turkey is the site of Pergamum.  Its dramatic citadel setting and the lower city and the Asclepion are fantastic.  When we visit the acropolis, our guides point to the general location of the “library.”

According to Strabo (xii.624) the library contained 200,000 volumes and was second in size only to the one in Alexandria Egypt—although many doubt that it really contained this many volumes. The volumes were carried off to Egypt by Mark Antony as a gift to Cleopatra after Julius Caesar had damaged the library in Alexandria.

This past fall I decided that I wanted to track down what actually still existed of the library that the Germans had excavated.  So, this past January I did.

View looking west at one of the four rooms of the Library (in the foreground) and the Courtyard of the Temple of Athena in the distance (see below). 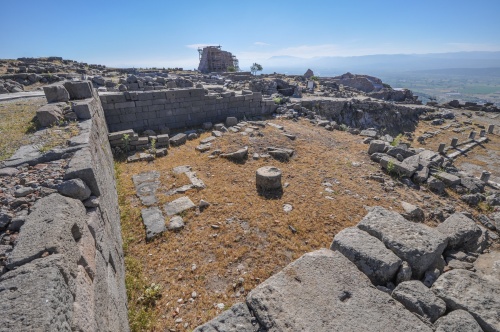 Another view of the same room of the “Library.” On the right side of the image, the northeast corner of the large courtyard (temenos) of the Temple of Athena can be seen.

On the far wall of the library notice the “holes” in the wall. The excavators believe that these held dowels that in turn supported shelves on which the scrolls were kept. In this room, a large statue of the Athena was discovered.

This large marble statue of the goddess Athena was found in the Library. It is a copy of the one that was in the Parthenon in Athens!

The statue is now displayed in the room in the Pergamum Museum in Berlin where the entrance (propalea) of the Temple of Athena is located.

Well, the library itself was located at the northeastern corner of the temenos of the Sanctuary of Athena—the chief deity of Pergamum.  It was actually on the second “floor” of the north stoa of the temenos.

On the plan, the Temple of Athena is in the lower left, and the library is composed of the four rooms on the north labeled the “Bibliothek.” The Germans say it was entered from the upper, not the lower level.

In the foreground (east) and on the right (north) notice the double row of columns. These Doric columns supported the roof of the porticos that surrounded the courtyard on three sides (north, east, and south).  The library was located on the platform on the far right side of the image.  It overlooked the courtyard.  (To view the temple of Athena, Click Here)

To view additional images of the acropolis of Pergamum including the Zeus Altar, the Temple of Trajan, the Theater, etc. Click Here.

This entry was posted in Places in Turkey and tagged Library, Pergamon, Pergamum. Bookmark the permalink.