Jonathan and His Armor Bearer — 1 Samuel 14

One of the famous stories surrounding the life of Saul is that of how Saul’s son Jonathan, along with his armor bearer attacked the Philistine garrison at Michmash (1 Samuel 14:1–16)—about 7.5 mi. north northeast of Jerusalem.

In the story it is recounted how from a ridge on the south they descended into a wadi (today the Suweinit) and ascended the slope north of the wadi to attack Michmash.

1Sam. 14:4     On each side of the pass that Jonathan intended to cross to reach the Philistine outpost was a cliff; one was called Bozez, and the other Seneh.  5 One cliff stood to the north toward Michmash, the other to the south toward Geba. (1 Samuel 14:4–5) 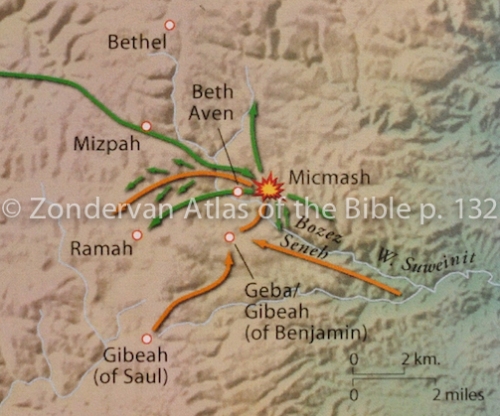 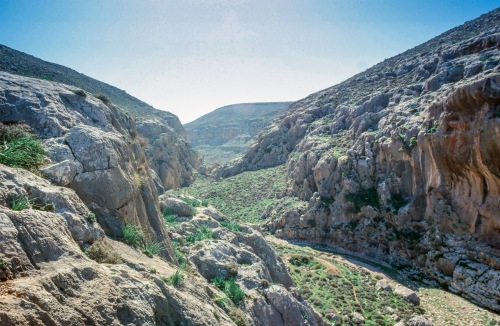 View looking east down the Wadi Suweinit in the vicinity of Michmash (modern Mukmas). Note the rugged cliffs on the north (left) and south (right). — Click on Image to Enlarge and/or Download.

It is probable that the cliff on the north is “Bozez” and that on the south (right) is “Seneh.”  But this is an area that they probably avoided due to the steepness of the cliffs.  They probably looked for a more gradual slope as they made their way down into (from upper right) and up out of the Wadi bed (upper left). 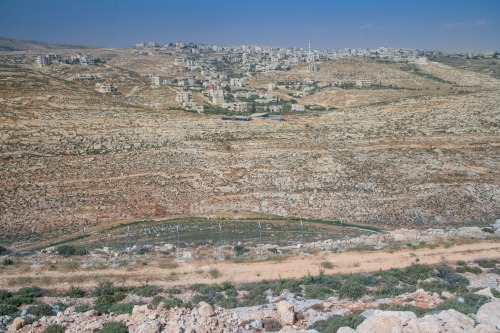 View looking north from the ridge on the south side of the Wadi Suweinit towards the Palestinian city of Mukmas—biblical “Michmash.”  This is probably in the vicinity of “the pass” mentioned in 1 Samuel 14:4. — Click on Image to Enlarge and/or Download.

View looking north from the ridge on the south side of the Wadi Suweinit—from where Jonathan and his armor bearer began their two man attack—towards the Palestinian city of Mukmas—biblical “Michmash.”  Michmash/Mukmas is situated on the hill in the distance.  The bottom of the Wadi Suweinit is (out of view) just beyond the fence and grass in the foreground.

The slope down into and out of the wadi is steep but passable—and this area avoids the cliffs to the north and south of this “pass”—see the image of the Wadi Suweinit above.

This entry was posted in Places in Israel and tagged Bozez, Jonathan, Philistines, Saul, Seneh, Wadi Suweinit. Bookmark the permalink.

6 responses to “Jonathan and His Armor Bearer — 1 Samuel 14”