Paul probably traveled on this road on both his second and third missionary journeys, as he traveled between Philippi and Thessalonica.  The current issue of Aramco World has a wonderful article on this road—describing it from west to east.  It includes some pictures, a video and a helpful map.

The Via Egnatia is the name of a Roman Road that connected ports on the Adriatic Sea with Byzantium.  From west to east, a traveler from Rome (Italy – not on map) would head southeast overland to Brundisium (a port on the east coast of Italy).

From there they would sail east, across the Adriatic Sea, landing at either Apollonia or Dyrrhachium (both on map).  They would head east, overland, on the “Via Egnatia” toward Byzantium — via Thessalonica, Amphipolis, Philippi, and Kypsela.

View looking east at a portion of the Via Egnatia near the Albanian village of Peqin. Here the roadbed is being used for local rural traffic! 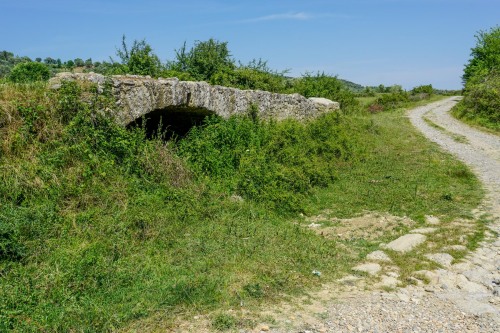 View looking northeast at a bridge of the Via Egnatia near the Albanian village of Peqin. Here local traffic is diverted to the right of the bridge.