A Visit to the Synagogue at Delos

A highlight on a visit to the sacred Greek island of Delos (it is about a 40 minute boat ride from Mykonos) was a visit to the synagogue on the remote east side of the island (see the end of this post). 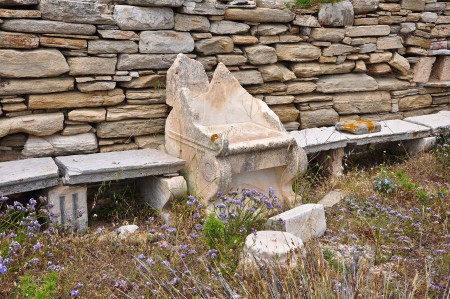 View to the west, southwest at the various rooms of the synagogue
Note the “Moses Seat” in the upper right part of the image
In the lower left portion of the image is one of the entrances into the synagogue

View to the west of the “Moses Seat” in context
Again, note the marble benches on both side of the seat

This synagogue is said to date to the second half of the second century B.C. which would make it the oldest synagogue yet discovered.

I knew the general location of the synagogue, but thought I would ask in the Delos museum how to get there (bad mistake).  The answer was, “that side of the island is closed.”  Well . . . I hadn’t traveled 6,000 miles by land, air, and sea, just to see this synagogue and be “turned away,” so we set off on the dirt road just to the north of the museum. 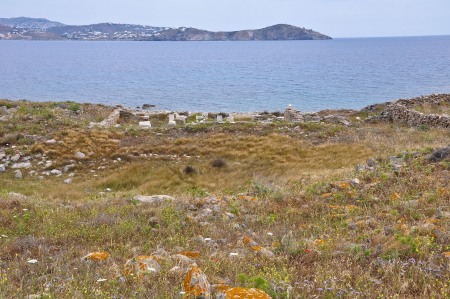 In a previous post I wrote about the very impressive synagogue at Umm el-Qanatir on the western side of the Golan Heights.  Yeshu Dray has for years been involved in its restoration.

Yeshu Dray has posted 14 pages of photos that illustrate the modern restoration techniques that he is using (be sure to click on “Current Projects” and then “Season 2011.”  These photos illustrate the use of silicone to imitate texture on columns, lintels and other stones;  the setting up of columns (anastylosis); the use of polystyrene and even embedding modern coins in the reconstruction—so that future generations will not confuse the reconstructed elements with the ancient ones!  IMHO a very interesting sequence of photos!

Posted in Artifacts, Places in Israel

Zodiacs in Synagogues — A Great Article

Many tour groups have visited the site of Sepphoris 3.5 mi. north northwest of Nazareth and have marveled at the beautiful mosaic floor of the 5th century CE synagogue.

Is this purely a pagan symbol?  Maybe, but if so, why are they found in numerous synagogue floors?

Walter Zanger’s article “Zodiac mosaics in ancient synagogues” examines all (including ones at Tiberias and Bet Alpha, etc.) of the examples found in Israel and proposes a very reasonable interpretation of them.  This article is currently (24 August) available free on the web site of the Biblical Archaeological Society.

Posted in Places in Israel