Ancient Picture of the Trojan Horse!

In light of the 2005 movie Troy many people are interested in the events surrounding the Trojan War—especially the “Trojan Horse” that was used by the Greeks to gain access to Troy and eventually to capture and destroy the city—ca. 1200 B.C.

As surprising as it may seem, we actually have a graphic representation of the Trojan Horse from around 670 B.C.!

The “neck” of a burial jar on which there is a clear depiction of what the potter/artist thought the Trojan Horse looked like—670 B.C.
Click on Image to see Details—And the Commentary Below

This representation is from a huge burial jar (pithos) that was found on Mykonos in 1961.  It dates to around 670 B.C. and is about 5 ft. [1.5 m.] tall!  In this close up of the Trojan Horse on the pithos  note the detail of  the head, ears, eye, nose, mane, body, tail, and four legs of the horse are clearly visible.  In the seven windows are the heads of Greek soldiers hiding in the horse and there are weapons in the arms of several of them.  Note also the four wheels by the four hoofs of the horse.  In addition there are four standing warriors with spears and shields (I assume from Troy).

One of the panels of a battle scene from the Trojan War
Warrior on the left, woman on the right, and a child being killed by a large sword!
Click on Image to Enlarge 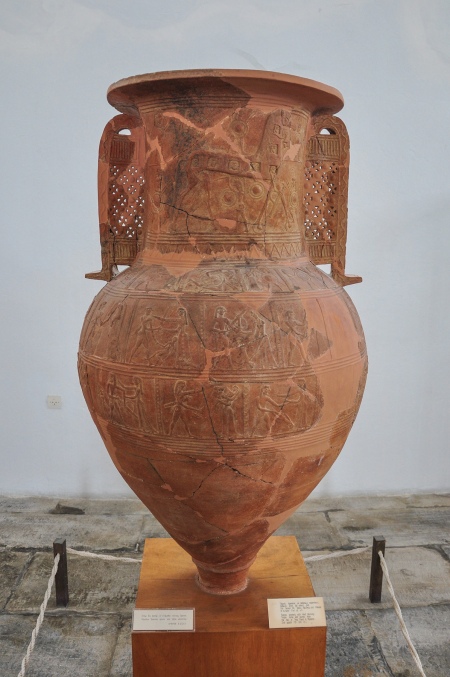 The 5 ft. tall burial jar on which there are representations of the battle for Troy
Including a depiction of the Trojan Horse used by the Greeks
Click on Image to Enlarge/Download

Posted in Archaeology, Places in Greece