Paul on the Road to Assos (Asia Minor/Turkey)

Please don’t miss the important discussion in the comments to this post.

Towards the end of Paul’s Third Missionary Journey on his way to Jerusalem Paul stopped for about at week at (Alexandria) Troas (Acts 20:5-12; map below).  From there he walked by foot from Troas to Assos while his seven companions traveled by sea to Assos (Acts 20:13–14). 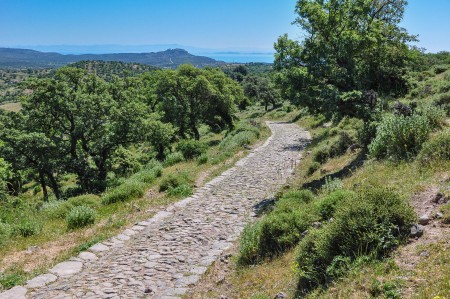 A portion of the well-preserved Roman Road that leads, 31 mi., from Troas to Assos — See image below for instructive details
Click on Image to Enlarge and/or Download

Paul probably walked south from Troas to the Smintheion area and then turned east to Assos — the 31 mi. journey took over 2 days to complete
Enhanced map from the Pelagios Map Project — See Reference Below

The distance from Troas to Assos, “as the crow flies,” is about 21 miles while the Roman Road south out of Troas through the Smintheion areaa and then east to Assos covers a distance of about 31 mi.  Thus the walk must have taken him at least two days.

The Bible does not say why Paul chose to walk instead of taking the ship but Dr. Mark Wilson suggests that Paul may have received a prophetic word at Troas that imprisonment would await him in Jerusalem (compare Paul’s message at Miletus to the elders from the Ephesian church; Acts 20:22-23).  Wilson suggests that he may have been reflecting on the impact of this in light of his recent successes:

Wilson goes on to compare the reflective agony of Jesus in the Garden of Gethsemane (Luke 22:42) to Paul’s solitary reflective walk from Troas to Assos:

“So somewhere on the road between the harbor  at Troas . . . and the city gate at Assos Paul apparently accepted his personal cup of suffering.”
(Wilson, Biblical Turkey, p. 360)

Map from Pelagius Map Project (free).  [This is the most accurate map of Turkey during the Classical Period based upon the Barrington Atlas of the Greek and Classical World; $376]

“In-Site — Paul’s Walk to Assos,” p. 360 in Biblical Turkey — A Guide to the Jewish and Christian Sites of Asia Minor.  This 398-page book is filled with Wilson’s wonderful descriptions and insights on numerous biblical and extra biblical sites in Turkey.

For additional high-resolution images of Assos click Here and Here.

Posted in Archaeology, Places in Turkey