Can Notre Dame Be Rebuilt? Yes!

Recently we have witness the catastrophic fire in the Cathedral of Notre Dame—and it’s loss to Christianity and Western Culture in general.  I have seen many sources dealing with the “traumas” that Notre Dame has suffered though its long history but I was surprised by “it will be rebuilt.”  Is this realistic? Or just wishful thinking?

Well, many churches have suffered sever damage through out their history, but to use an example of one in Rome, let me mention the Papal Basilica of Saint Paul Outside the Walls.

Rome — the remains of Saint Paul Outside the Walls after the fire of July 1823.

This is the church where, according to very early Christian tradtion, the Apostle Paul was buried after his martyrdom.  Constantine built the original church, but Theodosius built a new church in this spot around A.D. 390.  This church lasted until July 15, 1823 when it was destroyed by a fire caused by careless workmen who were repairing the roof.  This church had been standing for about 1,400 years before it was destroyed!  Much longer than even Notre Dame (ca. 800 years).

the interior of the church after its reconstruction in 1840.

View looking east down the central nave of the Basilica of Saint Paul Outside of the walls. The nave is flanked by double aisle on both the north and the south.  At the far (east) end is a triumphal arch that is a relic of the old pre–fire of 1823 that is supported by two granite columns.

View looking east at the mosaic at the top of the Triumphal Arch. Although heavily reconstructed this is a relic of the old pre–fire of 1823 arch.

On the top is a “grim–faced” Christ holding his hand blessing in the Greek manner. The four winged creatures above him have “faces” that represent the four Evangelists—gospel writers. Below them are figures representing the saints of the Apocalyse (book of Revelation). On the lower left side of the arch is St. Paul with a sword (of the spirit/word) and to the right St. Peter holding the keys to the Kingdom of Heaven.

Notice the grating and behind that, a small portion of the sarcophagus that is said to contain the remains of Saint Paul is barely visible.   During the reconstruction of the church two slabs were found with the inscription “PAULO APOSTOLO MART” (to Paul, apostle and martyr).  Below the glass floor are rock carvings and a portion of the apse of an earlier church.

The familiar couryard of the church.

View looking east through the courtyard (Quadriporticus) of the  Basilica of Saint Paul Outside the Walls.  The statue on the left is that of Saint Paul.   Notice the beautiful mosaics of the church.

If this wonderful church can be rebuilt, certainly Notre Dame can as well!

Almost all tour groups will spend several days in Jerusalem.  If you wish to get away for a private/intimate dinner alone, or with friends from Jerusalem, you may want to consider a late afternoon meal at the relatively new “Wine and Cheese Restaurant” on the rooftop of Notre Dame (just north of the New Gate).  The view to the east from there is spectacular: Dome of the Rock, Domes of the Church of the Holy Sepulcher, Bell Tower of the Redeemer Church, a full view of the Mount of Olives, and even the Hills of Moab in Transjordan!

View from the “Wine and Cheese Restaurant” on the terrace rooftop of Notre Dame.

I suggest arriving in the late afternoon/early evening to enjoy the soft light of the setting sun.

After dinner, check out the “antiquities” on display at the Notre Dame. 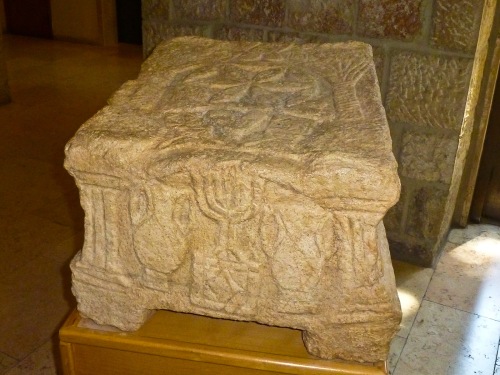 Model of artifact from Magdala – on the northwestern shore of the Sea of Galilee. In the lobby of Notre Dame. Note the menorah in the center.