Acts 27:29 And fearing that we might run aground somewhere on the rocks, they cast four anchors from the stern and wished for daybreak.

As noted previously, the captain, sensing that the ship was approaching land, cast off four “storm anchors” to secure the ship.  Mark Gatt notes, logically, that the ship did not spend the night directly above where the anchors had been cast into the sea (= Ancient Anchors + Artifact below).  He notes that “good seamanship shows us that for the safest anchoring, the length of the anchor rope has to be ten times as long as the depth of the sea.  A longer rope secures better anchorage and allows the ship to better ride the waves in a storm” (p. 104).

This being the case, it seems to me that the ship spent the night riding out the storm at the entrance to Salina Bay, not too far from Qawra Point—see on the map below “Night Anchorage in Storm?” and the following picture. 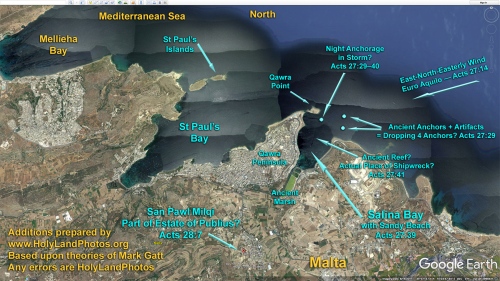 The following picture is of the rocky promontory called “Qawra Point.” This may have been the view, in the overcast dim of the dawn while the storm was still raging, that the 276 people on Paul’s ship would have seen.  If the storm anchors would have given way—the ship probably would have crashed into Qawra Point! 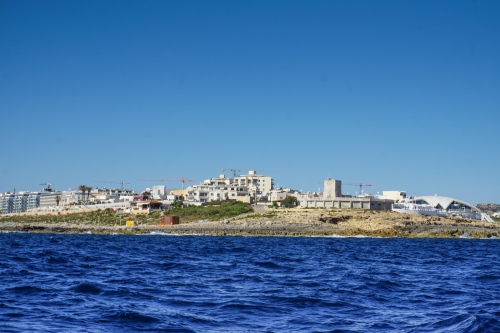 View looking west at Qawra Point (see map) that is located on the northern tip of the Qawra Peninsula. To the right of center is squat square tower is visible. This is called “Qawra Tower.”

The Qawra Peninsula forms the northwestern shore of Salina Bay. the Salina Bay is off the left (southwest) edge of this photo. The Qawra Peninsula/Point is what Mark Gatt believes to be the place where the “two seas met,” near which was the reef on which Paul’s ship eventually ran aground (Acts 27:41).

Acts 27:39 And when day came, they could not recognize the land; but they did observe a certain bay with a beach, and they resolved to drive the ship onto it if they could.

Salina Bay, with shallow reefs and some sandy beaches, fits the above description very well. 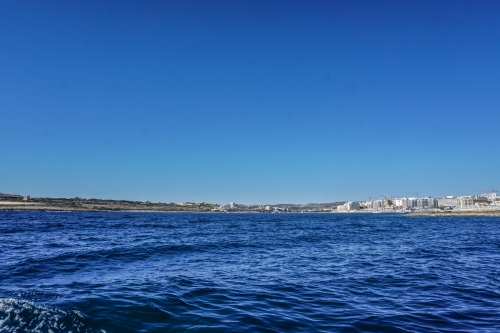 The photo above was taken near where the “Night Anchorage In Storm” is marked on the map above.   This may be the spot where they cut the anchors loose and attempted to head straight into Salina Bay. (see text below)

40 And casting off the anchors, they left them in the sea while at the same time they were loosening the ropes of the rudders, and hoisting the foresail to the wind, they were heading for the beach. 41 But striking a reef where two seas met, they ran the vessel aground; and the prow stuck fast and remained immovable, but the stern began to be broken up by the force of the waves. (NASB)

Mark Gatt believes that Paul’s ship ran aground on a sand reef  [now just below the surface] that is in the center of  Salina Bay—and broke apart there (Acts 27:41; text and picture above).  It was from there that the 276 people made their way to safety on the island of Malta from the shipwreck on the reef in Salina Bay.

You are invited to join us on our April/May 2022 following Paul from Shipwreck on Malta to Martyrdom in Rome Click Here.

Posted in Paul, Places in Malta

Mark Gatt has suggested that Salina Bay, just to the east of Saint Paul’s Bay, is actually the place where the ship carrying the Apostle Paul, and 275 other people, ran aground and was wrecked (see below for bibliography).  Why is this?

Note Salina Bay, just the right (east) of the center of the map and also “Ancient Anchors + Artifacts.” Click on the map to Enlarge and/or Download.

Diving in the 1960s, 1970s, and 1980s, Salvino Anthony Scicluna mapped various artifacts discovered around the Maltese Islands, but he knew of so many artefacts discovered in a concentration outside Salina Bay, that he believed that this could be a shipwreck site and in fact St Paul’s shipwreck site in 60 AD. (Gatt 97)

On the map above I have noted the place of the ‘concentration of artifacts and anchors,’ mentioned by Scicluna and Gatt as “Ancient Anchors + Artifacts.”  This concentration included artifacts, amphoras, and 5 lead Roman Anchor Stocks.  This led Scicluna to think that this was the site of a shipwreck.  Among the five anchor stocks is the largest Roman Anchor Stock ever discovered. It weighs over 3.5 tons and is 13.5 feet long!  It is now on display in the Malta Maritime Museum (picture below). 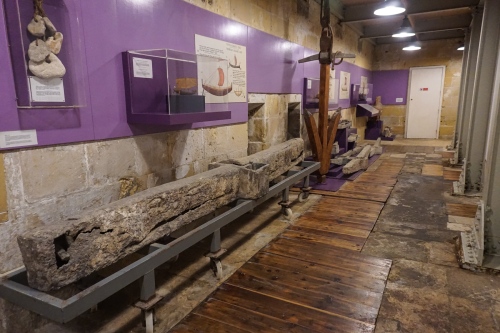 The largest Roman Anchor Stock ever discovered that weighs over 3.5 tons and is 13.5 feet long!

Then, on 24 April 2005, Mark Gatt, diving in 118 feet of water, near the ‘Scicluna concentration,’ discovered a large anchor stock that was inscribed with the names of two Egyptian deities: Isis and Sarapis.  This discovery was especially noteworthy because inscribed anchor stocks are rare (but see also Hera here).  This anchor stock was about 7 feet long and weighed about 1 ton—very large indeed! 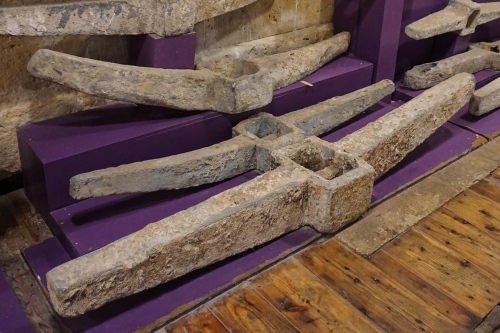 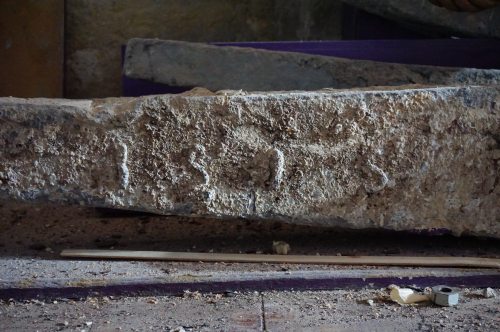 This is a detail of the word Isis, that appears in high relief, on this anchor stock.

So what is an “Anchor Stock?”  See the following labeled picture with the typical anchor parts: flukes, shank, stock, and rope. 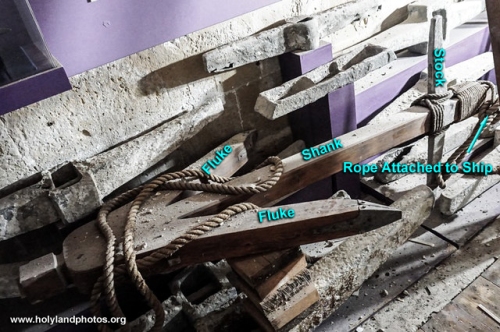 This is a reconstruction of a typical anchor from the Roman Period. All the parts of this “ancient anchor” are modern except the lead “Stock.”

The “Flukes” are the parts of the anchor, usually wooden and sometimes tipped with copper, that dig into the bottom of the sea. At the top of the wooden shank (right) a rope connects the anchor to the ship. The “stock” is made out of lead and often has a wood core. It helps the anchor to sink and helps to position the anchor so that the “flukes” are perpendicular to, and dig into, the sea bottom—thus securing the ship.  Very few wooden anchors have been preserved—but see below! 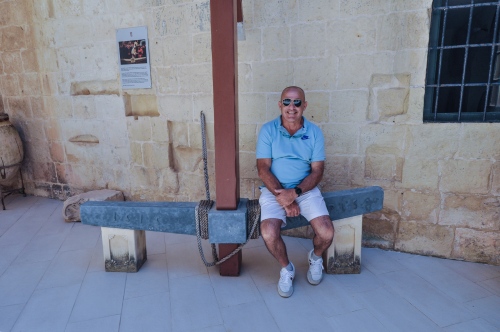 Mark Gatt, the discoverer of the “Isis – Serapis” anchor stock posing at a replica of the original anchor.

This replica was constructed for, and used in, the video that present Mark Gatt’s theories about the shipwreck.

Acts 27:29 Fearing that we would be dashed against the rocks, they dropped four anchors from the stern and prayed for daylight. . . .
38 When they had eaten as much as they wanted, they lightened the ship by throwing the grain into the sea. . . .
27:40 Cutting loose the anchors, they left them in the sea and at the same time untied the ropes that held the rudders. Then they hoisted the foresail to the wind and made for the beach.

Thus the area where the large anchor stocks, amphoras, and other artifacts were found (marked as “Ancient Anchors + Artifacts” on the above map) fits very well with the events described in Acts 27:28 and 38 as proposed by Mark Gatt—but not the place of the actual shipwreck (as Scicluna)! 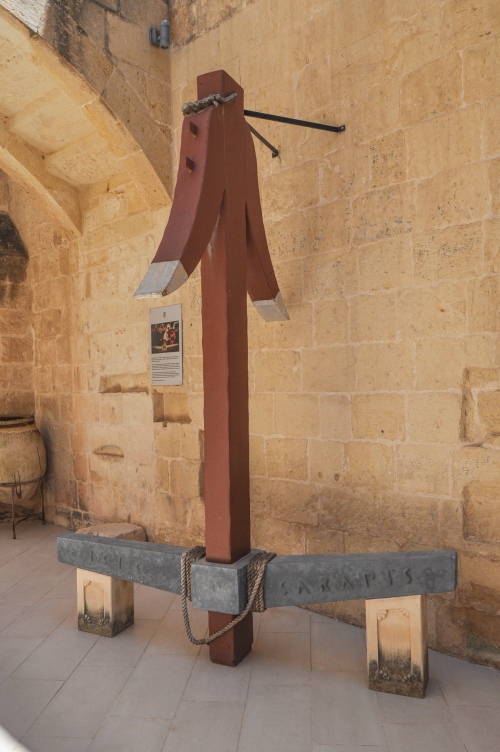 This is a full-scale model of what the “Isis — Serapis” anchor would have looked like.

The above replica was produced and used in a video that was produced by Mark Gatt.  It is now on display at the Wignacourt Museum in Rabat, Malta.

One prominent exception to the general rule that wooden anchors have not been preserved is the “One Armed Anchor” that was discovered at the site of the Ma’agan Mikhael Shipwreck off the coast of Israel.  The 41-foot ship, from the 5th century B.C. [dated by the pottery], was very well preserved because it was buried deep in the sand and thus protected from aerobic conditions that would have degraded the wood.  Among the finds was a “One-Armed Anchor.” 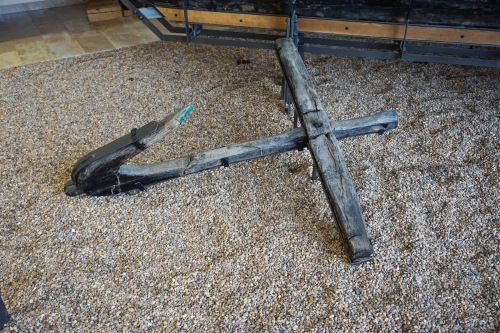 A One Armed Wooden Anchor from the Fifth Century B.C.    Note the totally preserved wooden shank, stock, and fluke!  The copper on the tip of the fluke is also original! Click on image to Enlarge and/or Download.

This one armed oak anchor was found on the starboard side of the bow of the shipwreck, attached to two ropes, the main anchor rope and trip rope.  Lead was inserted inside the anchor stock to ensure that the anchor would sink to the sea bottom with the arm downwards.  The anchor’s copper nail protected the wood from erosion.

All the wood in the anchor is original!  After excavation, it was soaked in polyethylene glycol for 7-years to help preserve it.  There is a modern metal support on the left curve support the anchor fluke.

To view nine images of the ship as displayed in the Hecht Museum in Haifa, click here.

Posted in Paul, Places in Malta

The Shipwreck of Paul on Malta — Part 1

On our last trip to Malta and Italy, in which we followed in the Footsteps of Paul from His Shipwreck on Malta to His Martyrdom in Rome, we were able to do something very special.  We were able to prevail upon Mark Gatt not only to lecture to us about his discovery of the “Isis/Sarapis” lead anchor stock to the north of Salina Bay (map below), but we were also fortunate enough to have him lead us on a boat trip out on to the waters in and around St. Paul’s Bay and the Salina Bay—two prime candidates for the location of the Shipwreck of Paul (Acts 27:26–28:1). 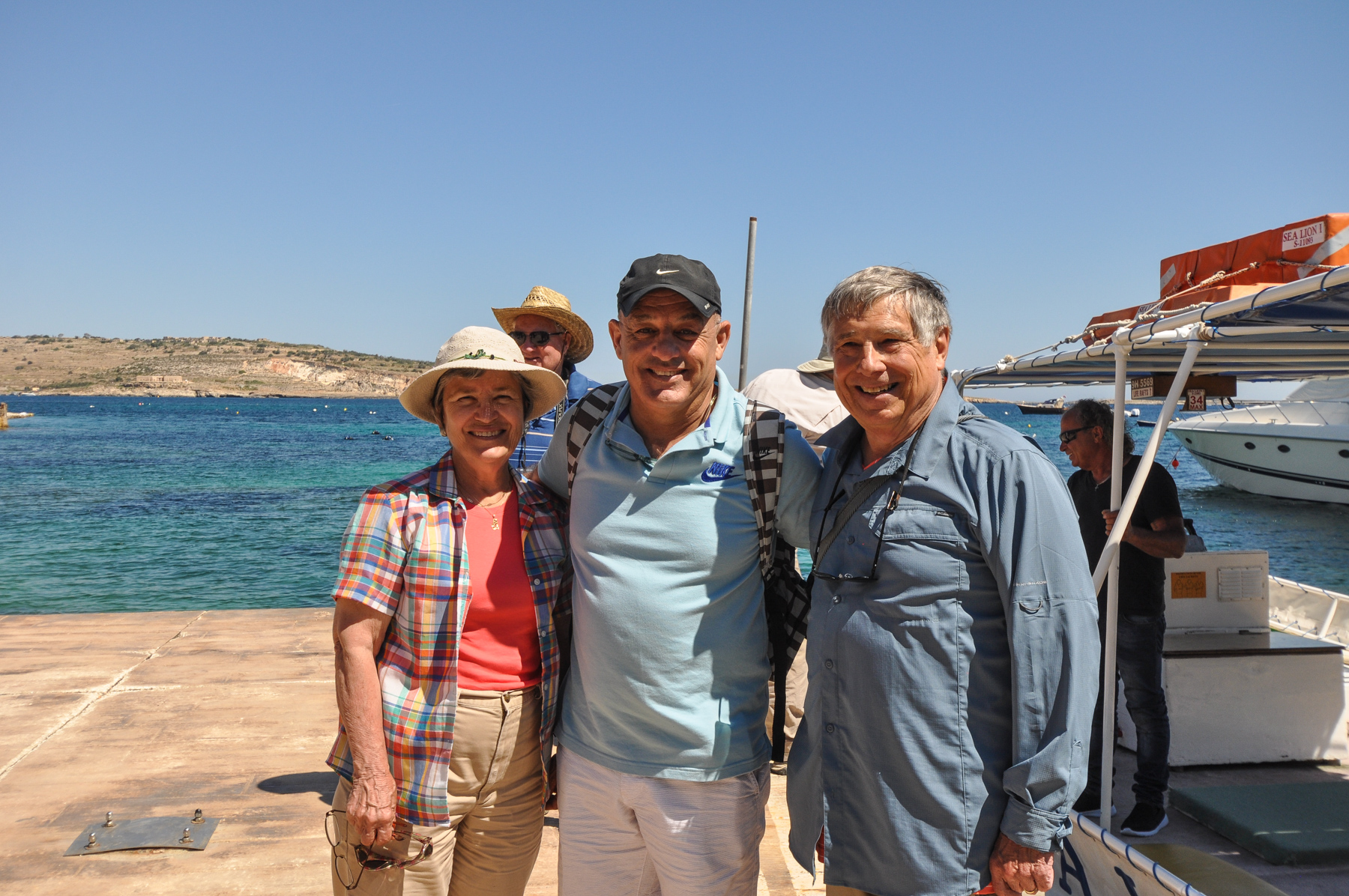 Mary and Carl with researcher/diver Mark Gatt (center) next to our Luzzu.

To do this, we boarded a traditional Maltese boat called a “Luzzu.” 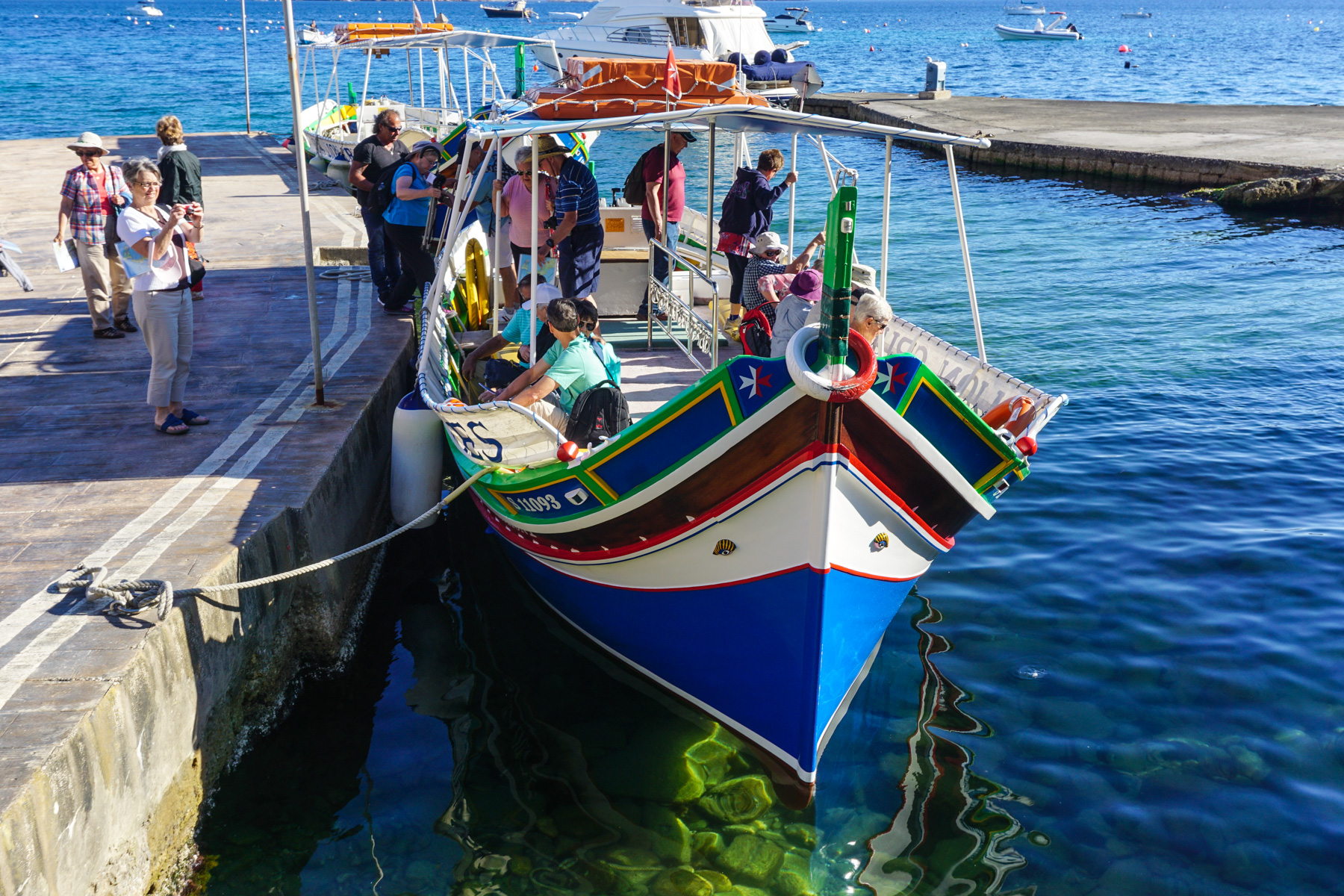 Our group boarding the Luzzu. 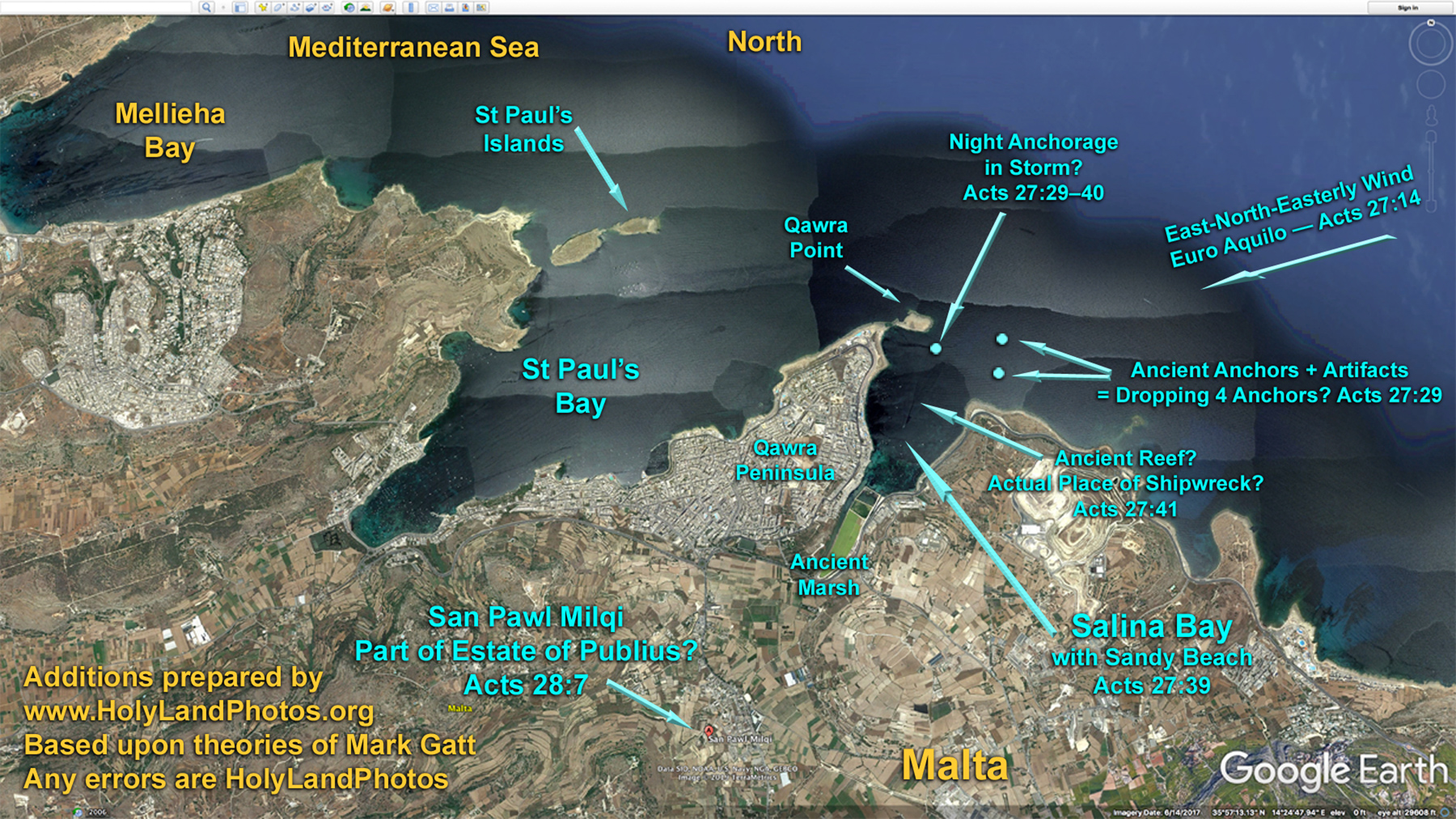 Our nautical adventure took us to two of the places that are candidates as being the site of Paul’s Shipwreck: namely to St. Paul’s Islands and Salina Bay (favored by Gatt).

Who is Mark Gatt?

Mark is a man on a mission. His PAVLVS The Shipwreck 60 AD is the result of a wondrous underwater discovery while scuba diving just off Qawra Point – the remains of a huge Roman-period lead anchor stock embossed with the names of the Egyptian gods ISIS and SARAPI(S). He has been scuba diving for the past 30 years and has been an active volunteer in Civil Protection for the same number of years. For most of this time, Mark was commanding and coordinating a group of rescue divers and was involved in many underwater search and recovery operations for missing persons at sea.

In our next post, we will take a look at St. Paul’s Islands.

For a brochure detailing our April 27–May 10, 2022 trip, By Sea & Land: Paul’s Journey to Rome: Malta, Sicily, Italy on which we will again journey by Luzzu to the place of Gatt’s important discovery, contact Dr. Carl Rasmussen at 2footstepstours@gmail.com.