Jonah and the Great Fish

In recent days there has been a lot of discussion about the James Tabor’s new book The Jesus Discovery (see the web site The Jesus Discovery).  In particular the etching on an ossuary, that some have thought was a fish with Jonah in it mouth—a symbol of early Christianity, is being discussed. 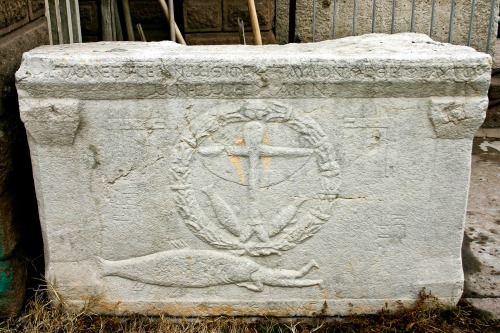 Stone Monument (sarcophagus?) in Konya Museum with a depiction of Jonah and the Fish — Lower portion of the object

In the center note the laurel wreath that surrounds an anchor in the shape of a cross with two fish at its base.  Below it is a depiction of Jonah being swallowed by a large fish—a Christian symbol associated with the resurrection of Jesus (Matthew 12:40).

Besides being interpreted as something similar to the above, the etching on the ossuary has been interpreted as part of a tomb (a nefesh) or a vase of some type (Gordon Franz).  Todd Bolen (Wednesday 29 February 2012) has collected many of the major articles that feature in this discussion.

For more details on the object above Click Here.