A Large Inscribed Tablet from Assos — Who is god/God?

One of my favorite places to visit is Assos, in northwestern Turkey on the Aegean Sea (Acts 20:13-14). Often times our groups have stayed at a hotel that is part of the fishing harbor there. When we visit the acropolis, with the magnificent remains of a Temple to Athena, I take time to read a “decree” that the citizens of Assos made, and sent to Emperor Caligula—pledging their loyalty to him!

By this point in our trips, we have often discussed the importance and pervasiveness of the Imperial Cult and the conflict between the grand Kingdom of the Roman Emperors and Paul’s preaching of the “Kingdom of God” (Acts 8:1-2; 14:22; 19:9; 28:23, 28).

I had tried, in vain, to track down the location of this tablet. For some reason, I thought it was in a museum in Boston! Well, when walking through the remodeled Archaeology Section of the Istanbul Archaeology Museum, I walked around the wall of a display, and there, right in the center of the opening into the next room, was this large (I am guessing that it measures 1.5 x 2. 5 feet), glistening, bronze “tablet” in front of me. What was it? Looking at the very brief description I realized that this was the “Assos Tablet” that I had been quoting all of these years! Yes, I was very excited!

This bronze tablet was found in 1881 at Assos in which inhabitants of Assos swore to emperor Gaius [Caligula] when he gained power.

In the following translation from Elwell and Yarbough, note the bold faced words and compare how similar they sound to the gospel message that Paul was preaching.

Under the consulship of Gnaeus Acerronious Proclus and Gaius Pontius Petronis Nigrinus [A.D. 37].

Decrees of the Assians by the Vote of the People

Since the announcement of the coronation of Gaius Caesar Germanicus Augustus (Caligula), which all mankind had longed and prayed for, the world has found no measure for its joy, but every city and people has eagerly hastened to view the god, as if the happiest age of mankind [the Golden Age] had now arrived:

It seemed good to the Council, and to the Roman businessmen here among us, and to the people of Assos, to appoint a delegation made up of the noblest and most eminent of the Romans and also of the Greeks, to visit him and offer their best wishes and to implore him to remember the city and take care of it, even as he promised our city upon his first visit to the province in the company of his father Germanicus.

We swear by Zeus the Savior and the god Caesar Augustus [Octavian] and the holy Virgin of our city [Athena Polias] that we are loyally disposed to Gaius Caesar Augustus and his whole house, and look upon as our friends whomever he favors, and as our enemies whomever he denounces.  If we observe this oath, may all go well with us; if not, may the opposite befall.

In two previous “posts” I described “Paul on the Road to Assos” (Acts 20:5-12) and “Paul’s Arrival at Assos” and the Temple of Athena at Assos.  The Assos that Paul visited was a well–established Greco Roman city.  Indeed, at one time the philosopher Aristotle had lived and taught in the city (ca. 347–343 B.C.).

As in other Roman cities, the citizens of the city would assemble as the ekklesia in the theater to discuss and debate civic affairs.

The city itself, like other Roman cities, were active in honoring/worshiping the Emperor, his family, and his predecessors.  In fact, in 1881 a bronze tablet was found at Assos that dates to A.D. 37—roughly 20 years before Paul’s visit.  This tablet “records the oath of allegiance that Assos’s inhabitants swore to the emperor Gaius [Caligula] when he gained power.  It reads:

“… Since the announcement of the coronation of Gaius … (Caligula), which all mankind had longed and prayed for, the world has found no measure for its joy, but every city and people has eagerly hastened to view the god [Caligula], as if the happiest age for mankind had now arrived.

It seemed good to the Council, and to the Roman business men here among us, and to the people of Assos, to appoint a delegation … to visit him and offer offer their best wishes and to implore him to remember the city and take care of it ….

We swear by Zeus the Savior and the god Caesar Augustus [Octavian] and the holy Virgin of our city [Athena Polias] that we are loyally disposed to Gaius Caesar Augustus and his whole house, and look upon as our friends whomever he favors, and as our enemies whomever he denounces.  If we observe this oath, may all go well with us; if not, may the opposite befall.
(reference below)

Thus again, Paul and his companions encountered the veneration (worship) of the Emperors even here at Assos. 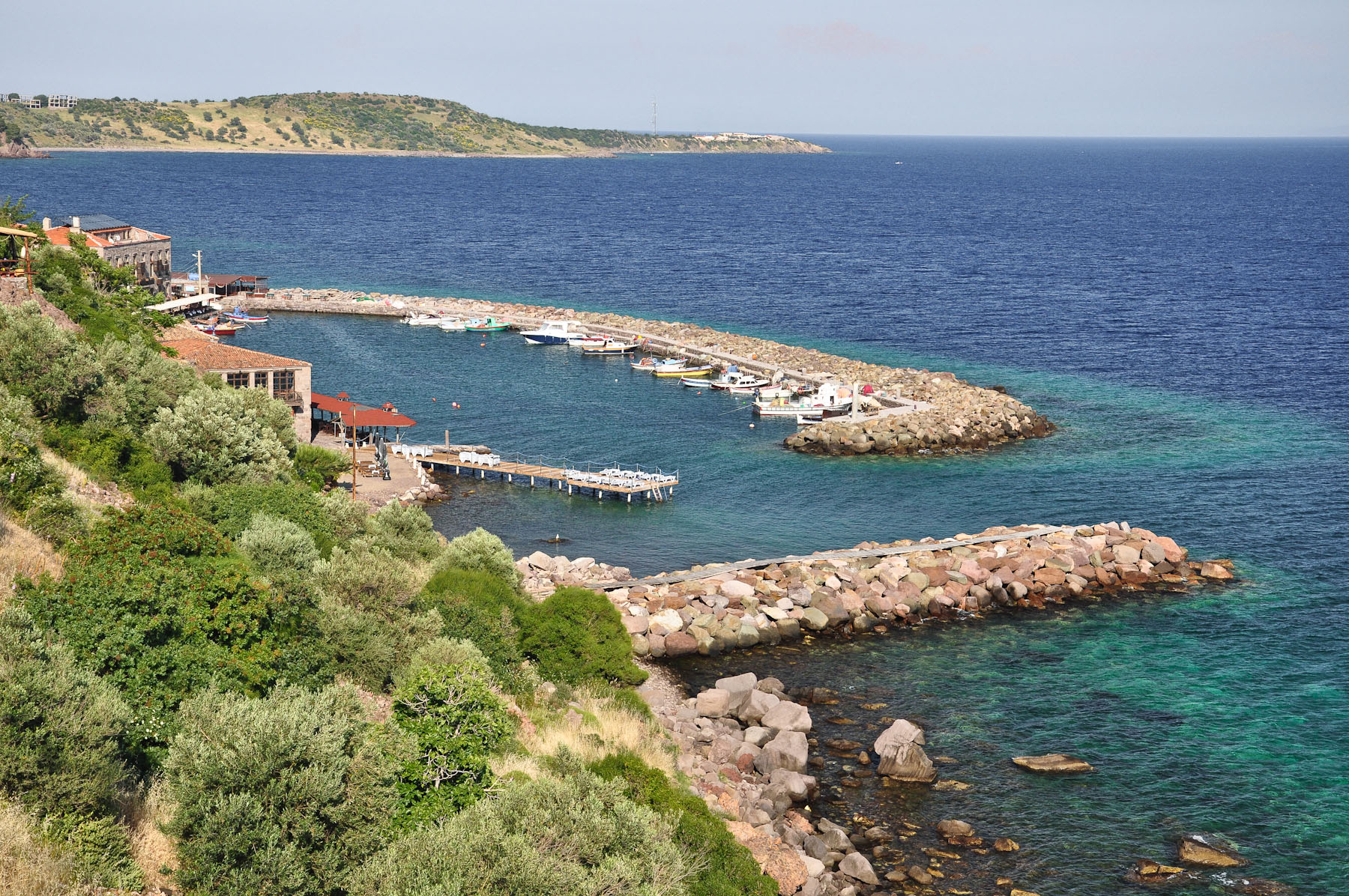 The Modern Port of Assos

Today the harbor as Assos serves the fisherman and a number of boutique hotels line its dock [on our tours we typically stay in one of these hotels].

However, the harbor that Paul left from for Mytilene was located a bit to the east of the modern harbor. 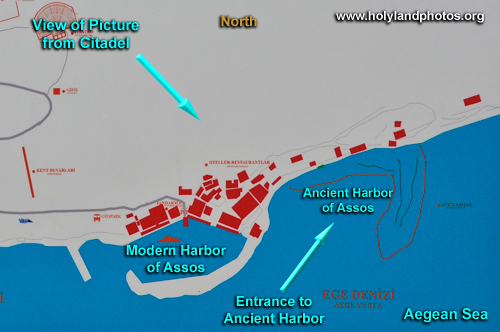 Note the locations of the Modern and Ancient Harbors.

To view additional images of the site of Assos Click Here.

The quote above is from pp. 136–37 in Elwell, Walter A., and Robert W. eds. Yarbrough. Readings From the First–Century World: Primary Sources for New Testament Study. Grand Rapids, MI: Baker Books, 1998.

In a previous post, “Paul on the Road to Assos,” I shared some comments and an image of the road that led from Troas to Assos (Acts 20:5–12).

As Paul approached Assos he probably would have come down this road that was lined with funerary monuments that honored the deceased of the city.

He then would have entered this magnificent city gate that was built in the fourth century B.C. and is still standing to a height of 46 ft.!  Alternatively, he may have taken the road that skirts this gate to the west and descends directly to the harbor.

Western Wall and Western Gate at Assos
Built in the 4th century B.C.
Click on Image to Enlarge and/or Download

The Hellenistic walls at Assos are some of the best preserved from ancient times.

The remains of the Doric Temple of Athena on the Acropolis of Assos
It was built around 530 B.C. In the distance is the Island of Lesbos
Click on Image to Enlarge and/or Download

At the time of Paul’s visit, the Temple of Athena was almost 600 years old.  It is situated on the Acropolis that towers 780 ft. over the Aegean Sea.

Paul on the Road to Assos (Asia Minor/Turkey)

Please don’t miss the important discussion in the comments to this post.

Towards the end of Paul’s Third Missionary Journey on his way to Jerusalem Paul stopped for about at week at (Alexandria) Troas (Acts 20:5-12; map below).  From there he walked by foot from Troas to Assos while his seven companions traveled by sea to Assos (Acts 20:13–14).

A portion of the well-preserved Roman Road that leads, 31 mi., from Troas to Assos — See image below for instructive details
Click on Image to Enlarge and/or Download 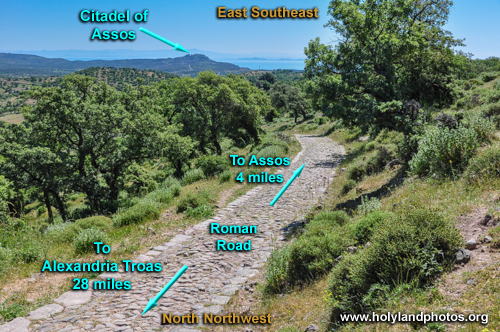 Paul probably walked south from Troas to the Smintheion area and then turned east to Assos — the 31 mi. journey took over 2 days to complete
Enhanced map from the Pelagios Map Project — See Reference Below

The distance from Troas to Assos, “as the crow flies,” is about 21 miles while the Roman Road south out of Troas through the Smintheion areaa and then east to Assos covers a distance of about 31 mi.  Thus the walk must have taken him at least two days.

The Bible does not say why Paul chose to walk instead of taking the ship but Dr. Mark Wilson suggests that Paul may have received a prophetic word at Troas that imprisonment would await him in Jerusalem (compare Paul’s message at Miletus to the elders from the Ephesian church; Acts 20:22-23).  Wilson suggests that he may have been reflecting on the impact of this in light of his recent successes:

Wilson goes on to compare the reflective agony of Jesus in the Garden of Gethsemane (Luke 22:42) to Paul’s solitary reflective walk from Troas to Assos:

“So somewhere on the road between the harbor  at Troas . . . and the city gate at Assos Paul apparently accepted his personal cup of suffering.”
(Wilson, Biblical Turkey, p. 360)

Map from Pelagius Map Project (free).  [This is the most accurate map of Turkey during the Classical Period based upon the Barrington Atlas of the Greek and Classical World; $376]

“In-Site — Paul’s Walk to Assos,” p. 360 in Biblical Turkey — A Guide to the Jewish and Christian Sites of Asia Minor.  This 398-page book is filled with Wilson’s wonderful descriptions and insights on numerous biblical and extra biblical sites in Turkey.

For additional high-resolution images of Assos click Here and Here.

Posted in Archaeology, Places in Turkey