Where Was The Largest Altar in the Ancient World?

View looking southeast at the huge altar that was constructed by Hieron II in the third century B.C. at Syracuse, Sicily!  Click on images to Enlarge and/or Download.

This altar is 643 feet long and 75 feet wide!  Most of what is visible in the picture is carved out of “living rock.” There was a superstructure but most of the stones have been carted off and reused in other buildings in Syracuse. It had been covered with plaster. Many think it was dedicated to Zeus Eleutherios (Zeus the Liberator) and that at its dedication 450 bulls were sacrificed!  Hiero II was the ruler of Syracuse from 270 to 215 B.C. 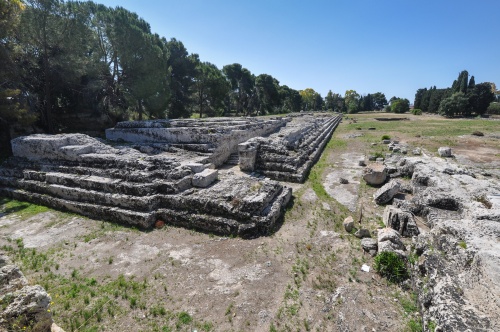 View looking southeast at the huge altar that was constructed by Hieron II in the third century B.C.

Syracuse was a Greek and Roman city on the southern portion of the east coast of Sicily. Paul spent three days here when the ship that carried him from Malta to Puteoli docked here. (Acts 28:12).

Acts 28:11    After three months [on Malta] we put out to sea in a ship that had wintered in the island. It was an Alexandrian ship with the figurehead of the twin gods Castor and Pollux. 12 We put in at Syracuse and stayed there three days. 13 From there we set sail and arrived at Rhegium. The next day the south wind came up, and on the following day we reached Puteoli.

This probably happened in the spring of A.D. 60.  This altar was 300 years old by the time that the Apostle Paul passed through Syracuse—as a prisoner—on his way to Rome. 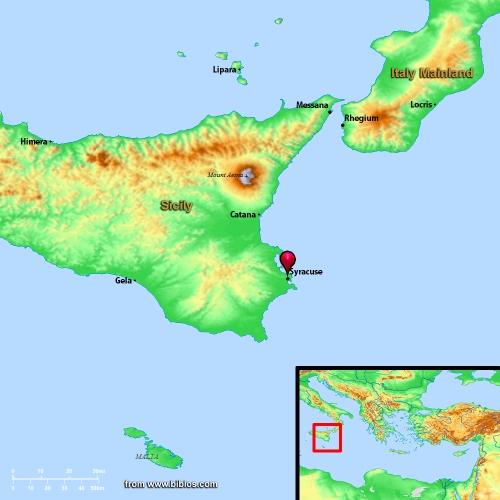 Syracuse was founded in 734 B.C. and reached its zenith in the sixth and fifth centuries B.C. The Athenians laid siege to it (415–413 B.C.) but were seriously defeated and this defeat helped lead to the decline of the Golden Age of Athens. Syracuse, along with the whole of Sicily, was fought over by the Romans and the Carthaginians.

In 212 B.C. Rome conquered the city. It carried off many Greek captives and many pieces of Greek artwork to Rome. This influx led to the Romans turning their cultural “tastes” towards things Greek. Unfortunately, the great mathematician and inventor, Archimedes, was killed by a Roman soldier, in spite of the order that he was to be spared.

Additional images can be viewed Here.