The Dead Sea Scrolls and COVID-19

The Dead Sea Scrolls, which include some of the earliest biblical texts, are considered the most significant archaeological find of the 20th century. [the curator, Hagit] Maoz is one of the people charged with their safekeeping . . . knows exactly where the museum’s scrolls are: behind five locked doors in a humidity and temperature-controlled vault at the Shrine of the Book. 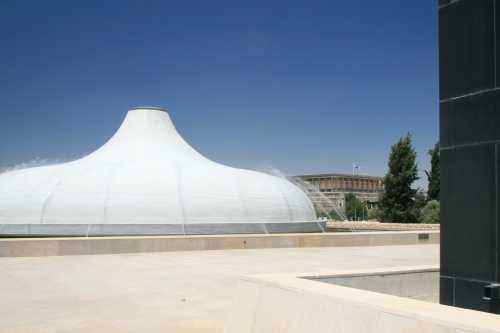 The Dome covering the central display area of the Shrine of the Book. In the background the Israeli Kenesset (Parlament). To the right, the black wall. Note the contrast, the light vs. the darkness.

Many of you have visited the exhibit inside the Shrine of the Book.  The article states that it takes four days to clean the ceiling inside the “dome” of central display area and they have done it this year (2020)

This [year, 2020] marks the first time since a 2004 renovation that all of the scrolls have moved into the vault.

. . . slowly walked the scroll section into the vault, passing through five open doors to place it onto a shelf in the innermost room, so secure that only Maoz and three other museum employees have permission to enter. When they returned, they closed the case, opened the next one, and started the process over again. The vault is just 10 or so yards from the exhibit, but it took around 90 minutes for them to complete the task.

Since they do not allow photography in the Shrine of the Book, here is a sample of a Qumran Scroll from the Archaeological Museum in Amman, Jordan. 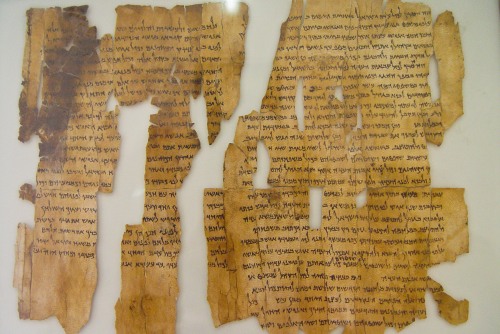 This is one of the very important Hebrew texts that was discovered in Cave 1 in 1947 (1QSa/1Q28a).  It is related to the longer “Rule of the Community Text.”  The two preserved columns describe the community in “the Last Days” and include information about a communal meal and a startling (and controversial) passage on how G-d will “father” the Messiah (descendant of David), thus “if the traditional reading is correct, then this Qumran text is describing a messianic figure who is in a special way a ‘son of God'” (Wise, p. 144)!

This text is/was on display in the Jordan Archaeological Museum located on the Citadel in Amman.