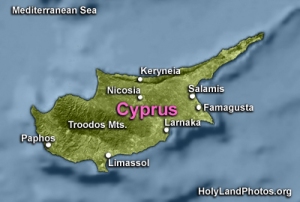 Cyprus  is mentioned 3 times in the Old Testament and 7 times in the New Testament.  It was the home of Barnabas (Acts 4:36) and was visited by Paul, Barnabas, and John Mark on Paul’s first missionary journey.

View looking west northwest at the Atrium of the “House of Theseus” (= Proconsul’s Villa) at Paphos. In the center of the Atrium (there are several in the villa) is a small sunken pond. In the upper left of the image is an apse—an “exedra” used for gathering. Click on Image to Enlarge and/or Download.

The “House of Theseus” is named after its main mosaic—that of Thesesus killing the Minotaur (at Knossos on Crete).  It is the largest Roman house discovered on Cyprus and an earlier version of it may very well have been the residence of Sergius Paulus, the proconsul (Roman governor of Cyprus), who is mentioned in Acts 13:4–12, and who was converted to “Christianity.” 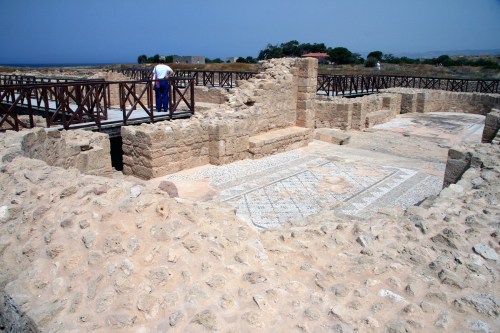 View looking southwest at one of the Audience Halls of the “House of Theseus” (= Proconsul’s Villa) at Paphos. Note the mosaic “carpet” of the hall.

Theseus is the central figure in the mosaic with the raised club. He is slaying the “Minotaur” (half bull half human being that inhabited the Labryrinth of Knossos (on Crete)—thus making him eligible to marry the daughter of the king of Knossos, Ariadne. The Greek inscriptions clearly show Ariadne in the upper left part of the image, Crete in the upper right, “Labyrinth” in the lower left, and the name of “Minotaur” in the lower right the Minotaur part of the mosaic was destroyed in antiquity.

The “House of Theseus” is named after its main mosaic—that of Theseus killing the Minotaur (at Knossos on Crete).

Cyprus is located at the northeastern end of the Mediterranean Sea.  It is the third largest Mediterranean Island with a population of 800,000 people.  80% are Greek Cypriots, 11% Turkish Cypriots, and 9% are foreign residents.  It is about 3,572 sq. mi. [9,251 sq. km.] in size—about half the size of the US state of New Jersey.  This palace has been under excavation by a Polish team since 1966.

This entry was posted in Places in Cyprus and tagged Paphos, Paul, Sergius Paulus. Bookmark the permalink.