In Israel, Gezer is exciting site visit.  One of its features is an unusual assemblage of large Standing Stones that R.A.S. Macalister found. 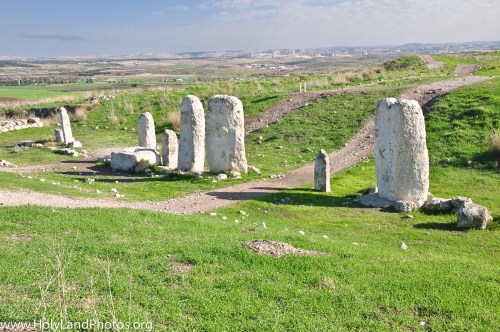 View looking northeast at 7 of the 10 standing stones that were excavated by Macalister (early 1900’s) and re-excavated by Dever (in the 1960’s).

They date to the Middle Bronze II Period (ca. 1800—1550 B.C.).   On the left side of the image the square basin, carved out on the top, which may have formed the base into which a standard was placed.

Image courtesy of the Palestine Exploration Fund. This is what the standing stones looked like when excavated by Macalister.

Macalister covered up what he had found because he was afraid, probably correctly, that the locals might recycle (euphemism) the materials to use in their own construction projects.

The function of these stones is not certain, but it has plausibly been suggested that they were set up by 10 tribes (one for each tribe) who made a treaty (covenant) among themselves, and that these stones were set up as a memorial/witness to commemorate that treaty.

Note how the Israelites set up stones at the foot of Mt. Sinai (Exodus 24:1–8) in a covenant establishing context:

24:1    Then he said to Moses, “Come up to the LORD, you and Aaron, Nadab and Abihu, and seventy of the elders of Israel. You are to worship at a distance,  2 but Moses alone is to approach the LORD; the others must not come near. And the people may not come up with him.”

3     When Moses went and told the people all the LORD’S words and laws, they responded with one voice, “Everything the LORD has said we will do.”  4 Moses then wrote down everything the LORD had said.    He got up early the next morning and built an altar at the foot of the mountain and set up twelve stone pillars representing the twelve tribes of Israel.  5 Then he sent young Israelite men, and they offered burnt offerings and sacrificed young bulls as fellowship offerings to the LORD.  6 Moses took half of the blood and put it in bowls, and the other half he sprinkled on the altar.  7 Then he took the Book of the Covenant and read it to the people. They responded, “We will do everything the LORD has said; we will obey.”

8     Moses then took the blood, sprinkled it on the people and said, “This is the blood of the covenant that the LORD has made with you in accordance with all these words.” (NIV)

Joshua 24:26 And Joshua recorded these things in the Book of the Law of God. Then he took a large stone and set it up there under the oak near the holy place of the LORD.

28     Then Joshua sent the people away, each to his own inheritance.

To view additional image of Gezer (including the original Gezer Calendar; the MB II gate; the water system; etc.) Click Here without obligation.

This entry was posted in Uncategorized. Bookmark the permalink.

One response to “Gezer Standing Stones”