Bethlehem: Church of the Nativity — The Unveiling!

During Christmas and Advent, Bethlehem—and the Church of the Nativity—are featured on many news broadcasts.

When visiting the Church of the Nativity in Bethlehem, visitors (rightfully) focus on the “grotto” that is the “traditional” place of the birthplace of Jesus.  Prior to 2013 the Upper Church was a bit dingy and the mosaics on the upper walls and the paintings on the columns/pillars where not too visible.  Since 2013 visitors have been greeted with all kinds of scaffolding and curtains so that not much of the church—that was built by the Emperor Justinian (ruled 527–565)—was visible.

View of the interior of the Church of the Nativity in Bethlehem in April 2016—during the process of restoration.

The Italians and Palestinians were/are involved in the still ongoing restoration project of the Church of the Nativity—that began ca. 2013.

However, in 2018, much of the restoration project is in the process of being unveiled—with stunning results! 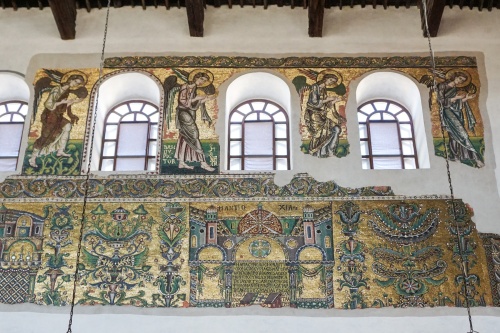 View of the restored mosaics along the north wall of the Church of the Nativity in Bethlehem.  The register depicts the Council of Antioch—AD 277. Click on image to enlarge and/or Download.

The large register, below the windows, depicts the key decisions of six provincial councils.

The one in the center, inscribed in Greek within a church, is from the Council of Antioch (AD 277). The name “Antioch” is spelled out above the church—6 letters to the left of the dome and three to the right. The text reads: “the Holy Synod of Antioch in Syria of 33 bishops took place before the Ecumenical Council of Nicaea against Paul of Samosata who held that Christ was a mere man. The Holy Synod expelled him as a heretic.”

Note the angels between the windows. At the foot of the one third from the right, is the name of the artist—”Basilius Pictor.”

“The mosaic decorations on the walls of the nave date to the restoration of 1165–9.  Each side had three registers: the detailed description made by the Franciscan Qaresmius in 1628 enables us to complete the missing sections.” (Murphy–O’Connor, pp. 235-36).

Restored mosaic on the south wall of the Church of the Nativity. Click on Image to Enlarge and/or Download.

In the upper portion note the image of a saint with a Greek inscription and below it Crusader graffiti. Click on image to Enlarge and/or Download.

View of one of a restored column in the Church of the Nativity in Bethlehem. In the upper portion note the image of a saint and below it Crusader graffiti.

Most of the red limestone pillars, quarried near Bethlehem, served in the fourth century church. From 1130, the Crusaders decorated the upper part of the pillars with painting of saints whose names appear in Latin and Greek.

For additional views of the restored mosaics and columns Click Here.

This entry was posted in Christians, Churches, Places in Palestine and tagged Bethlehem, Church of the Nativity. Bookmark the permalink.