My Favorite Site in Israel

People often ask me “what is your favorite place to visit [in Israel]?”  This is a tough question to answer, for I am “in love” with many “sites” in Israel.  But when forced to commit myself, my favorite site is a not-too-well-known place called Omrit — a site that is located on the western slopes of the Golan—just east of the Huleh Valley. 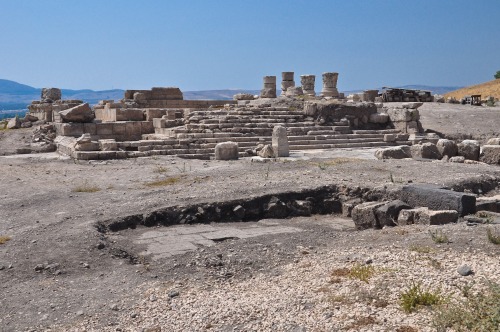 Plaza and approach to the Imperial Temple at Omrit (Caesarea Philippi?)

One major reason for my “love” of Omrit is that here you can really clearly see the foundations and significant architectural pieces of  THREE temples that actually look like temples—including the one that Herod the Great built for the worship of the Roman Emperor Augustus and that was actually in existence in Jesus’s day!

Josephus says that Herod the Great built three such temples, one at Caesarea Maritima (but virtually nothing of the Herodian original is visible to today), at Sebastia (where significant remains of a second century AD rebuild are visible), but here at Omrit the foundations and architectural fragments of “Herod’s Imperial Cult Temple” still exist!

Earliest “Shrine” — that was later covered by two later temples!

Since 1999 J. Andrew Overman of Macalester College of St. Paul, Minnesota(USA) has been excavating the site.  He has discovered three successive religious structures—the earliest (a “shrine”) dating to the Early Roman Period.

Southwest corners of the:
First (slightly above and left of center) “Herodian Temple to the Emperor Augustus”
and the Temple from the time of Trajian (lower right)

Overman believes that the first Temple was built by Herod the Great to honor his patron—the emperor Caesar Augustus (ruled 28 B.C. to A.D. 14).  Many believe that his temple was constructed in nearby “Panias” but Overman argues (I think correctly) that it was here at Omrit—”in the vicinity of Panias”—that it was constructed.  The second “Temple” was probably constructed during the reign of the Roman Emperor Trajian (A.D. 98-117).  The finds here are so significant that the Israel Museum has a prominent display of them.

Upside down corner capital of the “composite” order 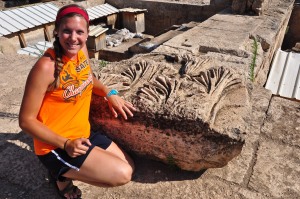 This entry was posted in Places in Israel, Temple and tagged Herod, Omrit, Temple. Bookmark the permalink.

2 responses to “My Favorite Site in Israel”