Samothrace — Seldom Visited by Tourists, BUT Visited by Paul (Acts 16:11)

Samothrace is a Greek Island that lies 25 mi. south of the Greek mainland.  This mountainous island was the home of the Sanctuary of the Great Gods where famous religious ceremonies took place.

On Paul’s Second Journey he traveled by ship from Troas (in Asia Minor) to Neapolis (in Europe).  Acts 16:11 notes that the trip took two days

From Troas we put out to sea and sailed straight for Samothrace, and the next day on to Neapolis.

It is clear that the ship overnighted at Samothrace before continuing on to Neapolis—the port city of Philippi.

There is no indication that Paul ever stepped off the ship, but if he did (which I think is probable), he may have visited the “Sanctuary of the Great Gods.”  Since their rituals were practiced at night, he may have even witnessed—from afar—some of the rites. 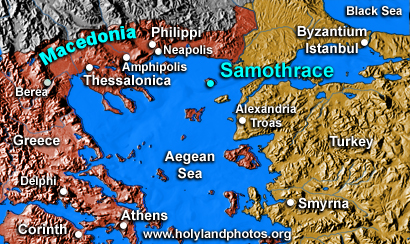 On his third journey Paul made the same trip, in the reverse direction, in 5 days (Acts 20:6)—evidently the winds were not as favorable on that trip (in the spring of the year).

To view 18 images, with commentary, of Samothrace Click Here.

Foundations of a mysterious Cult Building on Samothrace

One response to “Samothrace — Seldom Visited by Tourists, BUT Visited by Paul (Acts 16:11)”